Let me put this out here first, upfront, I like new manufacturers, I get excited to purchase their first models.  Look back though the archives, I jumped on Exactrail when they first arrived on the scene.  When I hear Blaine Hadfield, who was an influential designer at Exactrail had founded his own company, I got excited.  Arrowhead's first release just didn't do it for me, I model always modern, with a -10 year allowance on freight cars, and -5 on locomotives.  That first car was just a little too old for my allowance for error.  July 10th 2020, along comes this accurate representation of a Railgon, hyped to be better than the only other entry, a Walthers MainLine.

Within a few minutes of the Facebook live announcement I had ordered one.  3 were available, but I'm holding out for 2 of the as delivered scheme.  Lombard promptly shipped, and it arrived a day ahead of USPS estimates, (yesterday as I publish this). 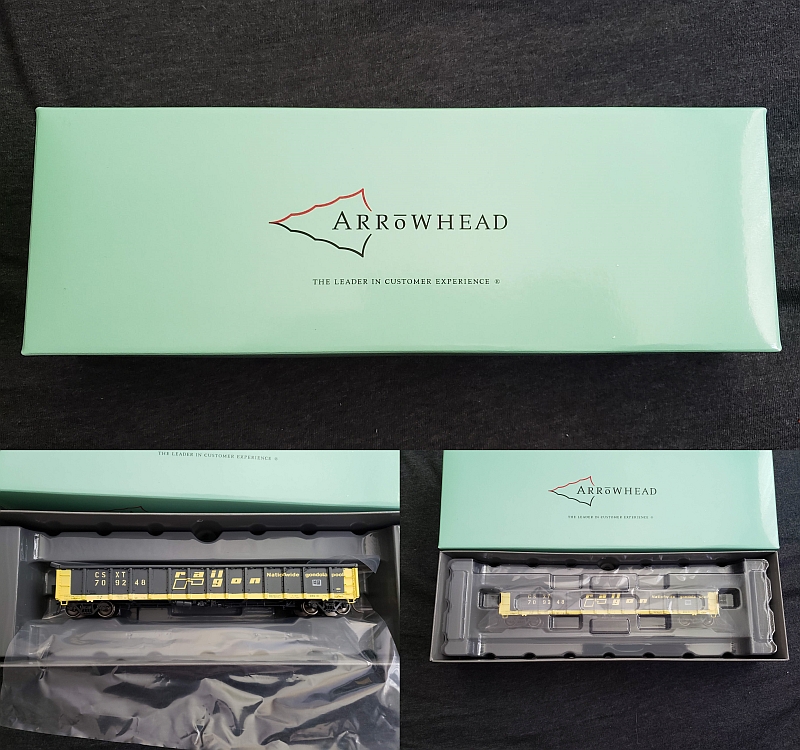 Packaged in a "tiffany-esque" box, these are sure to stand out on hobby shop shelves, just don't bring your wife!  As you can see above, Arrowhead uses the now common style of plastic clam shell, but opts for a closed box, not a clear plastic lid.  End labeling leaves one reminiscent of 1980's Athearn Blue Box.  Just the needed data, no photo of the car, like newer Athearn RTR.

Initial impression was one of wonder.  Arrowhead used 199 individual pieces in this car.  The walls of the gondola are actually made of up thin etched brass, 3 per side.  That's 6 large brass panels making up the sides, attached to cast plastic exterior ribs, with formed metal tie down rings on appropriate ribs.  Impeccable detail that will out do most any gondola on the market. 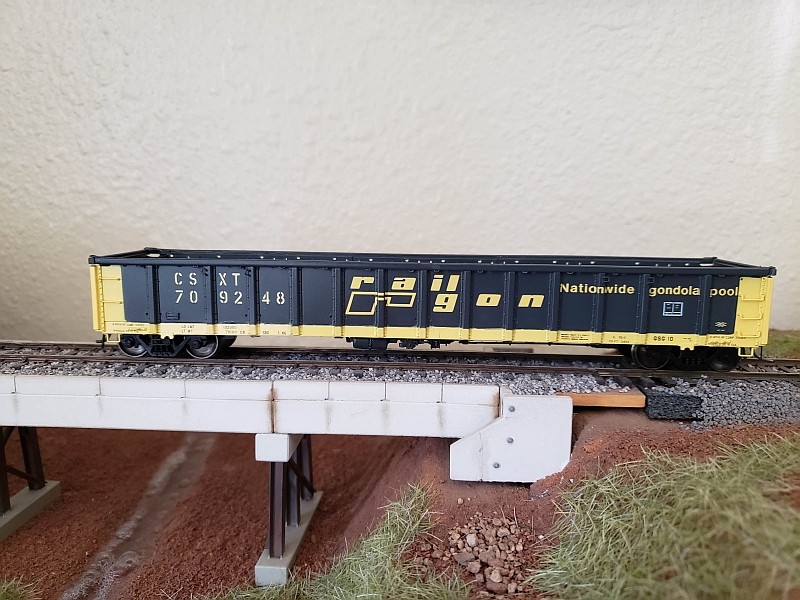 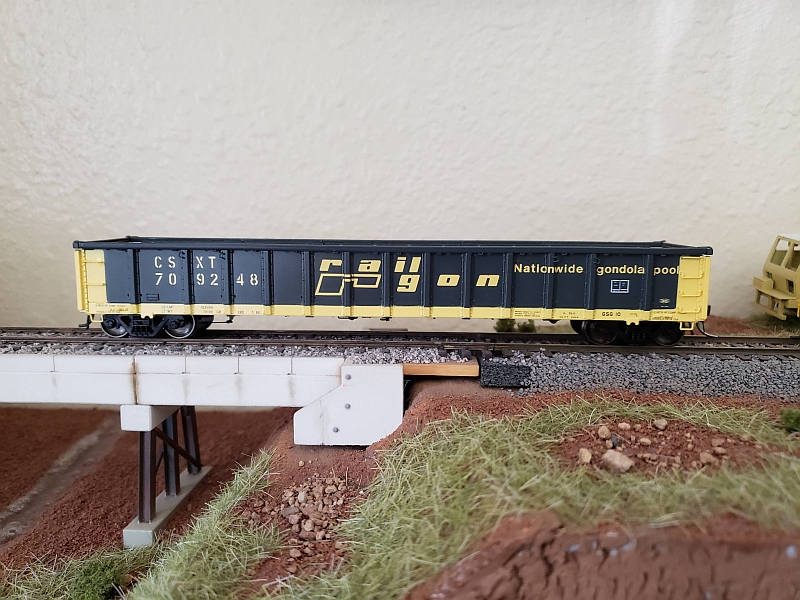 Interior detail follows the exterior in fidelity to the prototype. 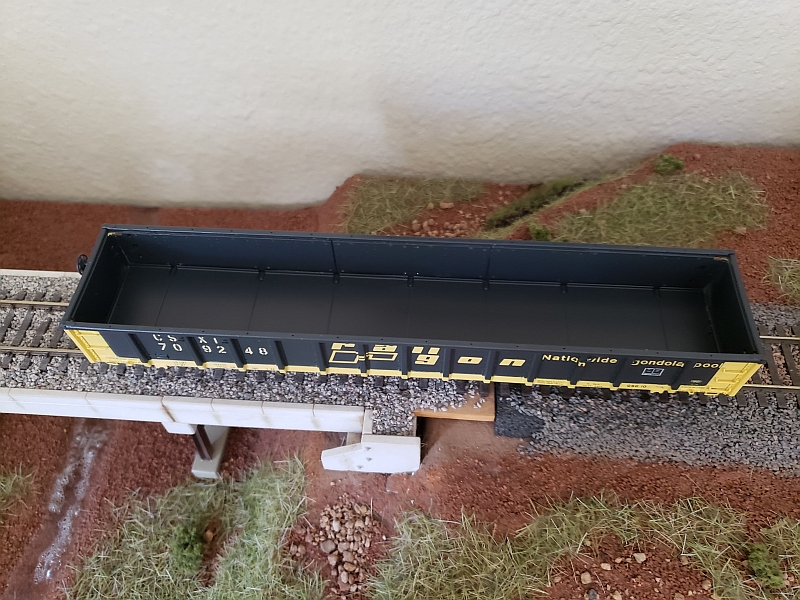 Arrowhead was able to correctly model the see through cutouts in the side walls, though the use of the etched sheets. 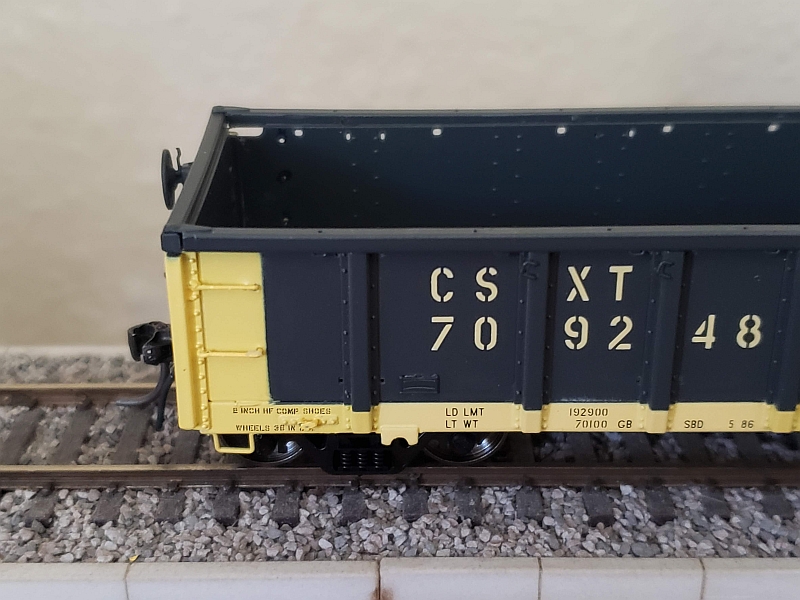 I did notice that the A end top cord on my example was bowing upwards slightly.  This can be an issue if it's common, and you intend to operate your car as a 1980's example, shortly after delivery.  Weathered and dented this shouldn't be an issue.  More on that farther down. 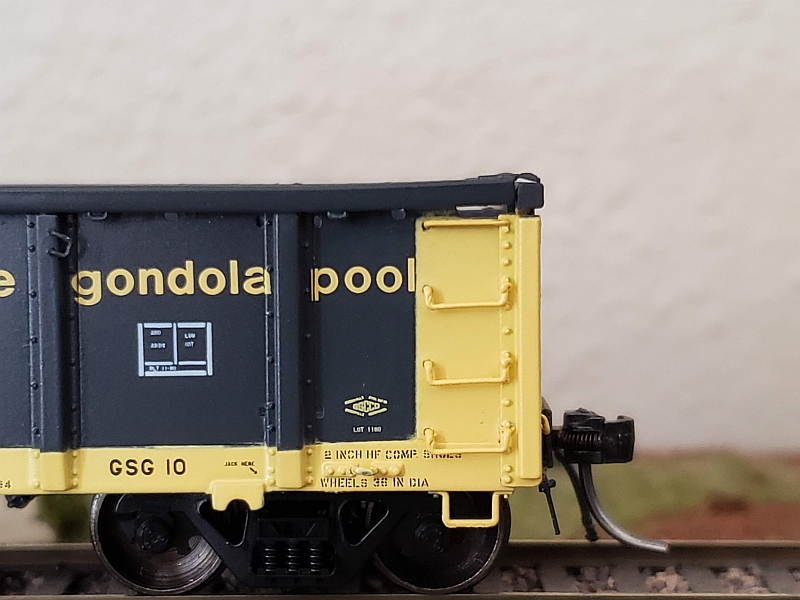 One thing worthy of note, the pad printing is pretty spot on.  Well, I should say, according to Arrowhead, is accurate car for car, down to the LD LMT and LT WT data. However if you look up, the "g" and "p" gap over the edge of the rib molding.  Not a problem if you weather your cars.

Underbody details are impeccable, see for yourself. 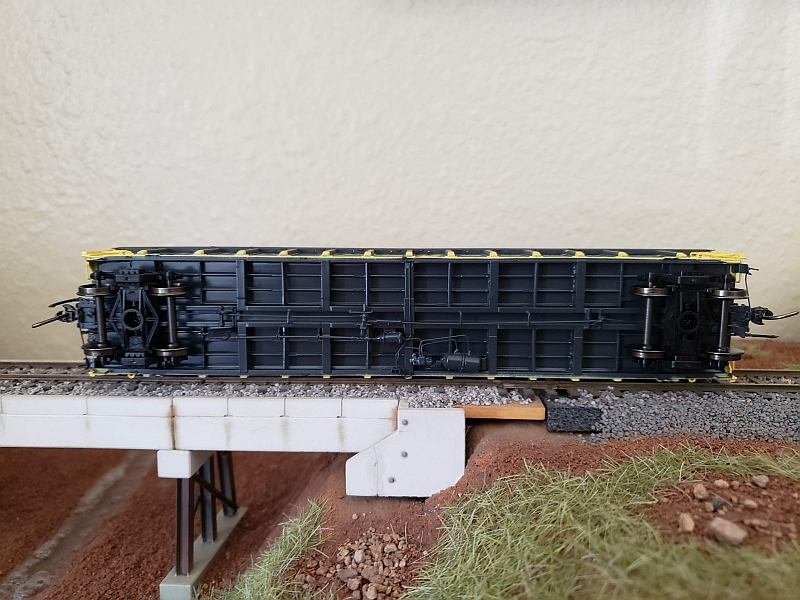 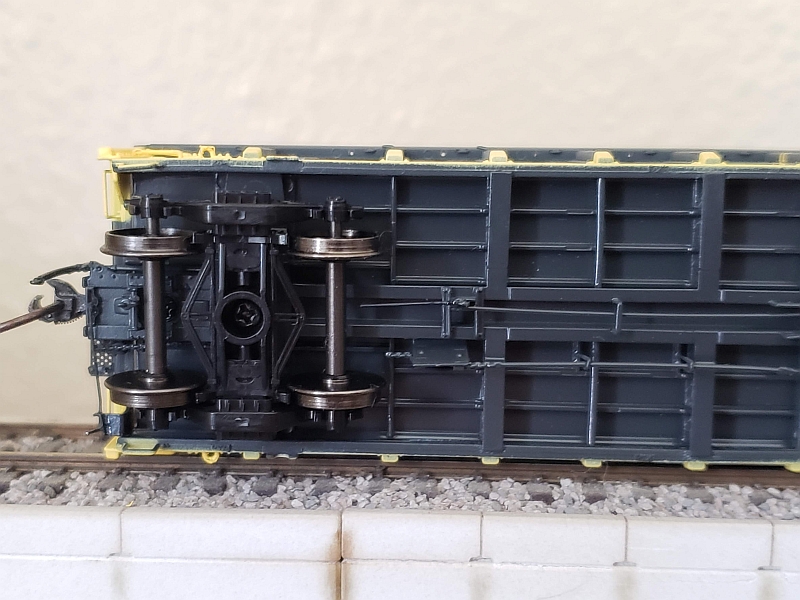 Kadee couplers are included from the factory, as are Code 88 "Semi-scale" 36" metal wheels on insulated metal axles.  Arrowhead notes that the body bolster is 2 scale inches higher than prototype to account for scale inaccuracies in model railroad wheels.  I noted this after purchase, but before my example arrived.  2" in HO scale is about .6mm (.58333 repeating), but it's not noticeable in coupler height.  My example rides jut a tad high when compared to a Kadee gauge. 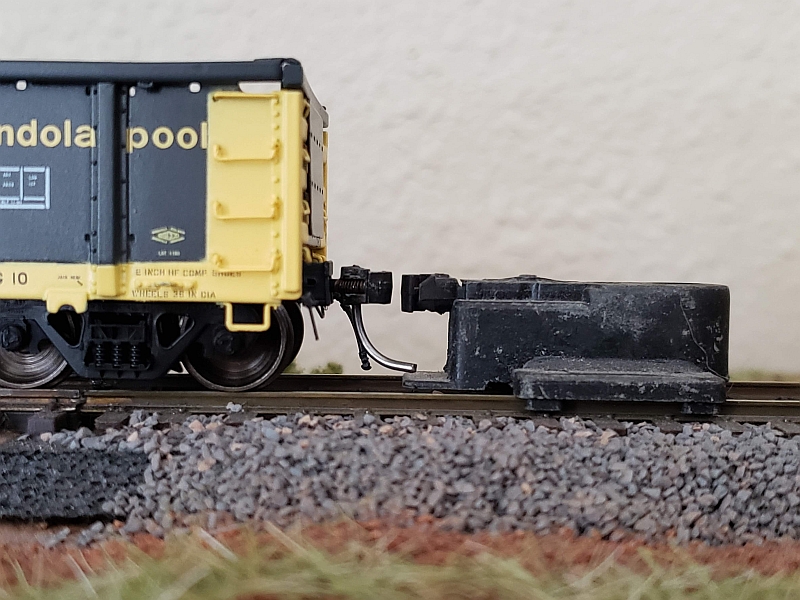 Now for the nitty gritty.  My not-so-scientific hands told me the car was light.  It is.  NMRA RP 20.1 suggests the car, which measures in at 7.5", should weight 4.75oz.  My example does not, it tips the scale at just over half that, 2.5oz.  See photos below.  I posted about this briefly in my Instagram story yesterday, and Arrowhead promptly sent me a response.  It is quoted word for word below:

The NMRA standards state that the weight standard isn't intended to be a precise figure, and the value by given by the formula represents a weight that plays to the lowest common denominator. According to the NMRA, the formula gives an appropriate weight for cars with plastic wheels, plastic axles, horn hook couplers and truck mounted couplers. They say in their official statements that cars that don't have these features can relax those standards. We do, since we provide Kadee body-mounted couplers, CNC-machined wheels and axles. Also, the NMRA states, in their official literature, that deviations of weight don't necessarily compromise performance with these features. This accords with extensive tests that we have conducted. 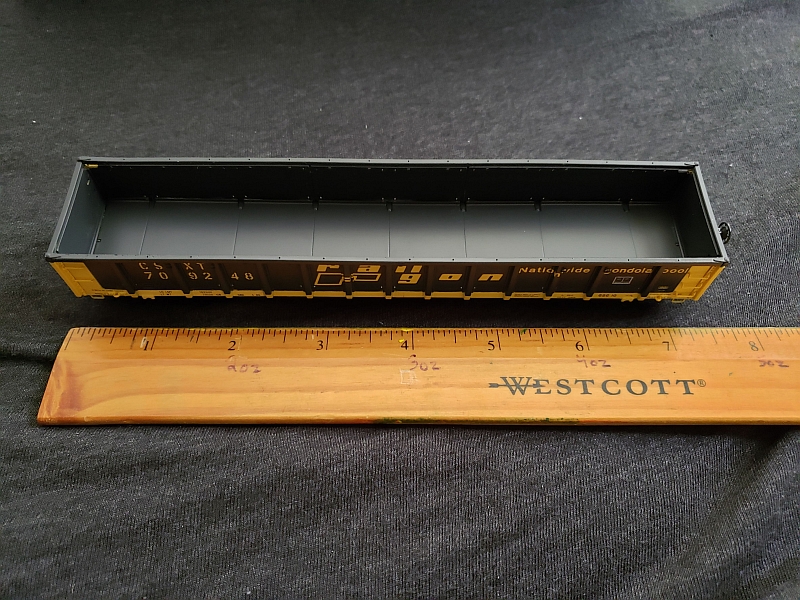 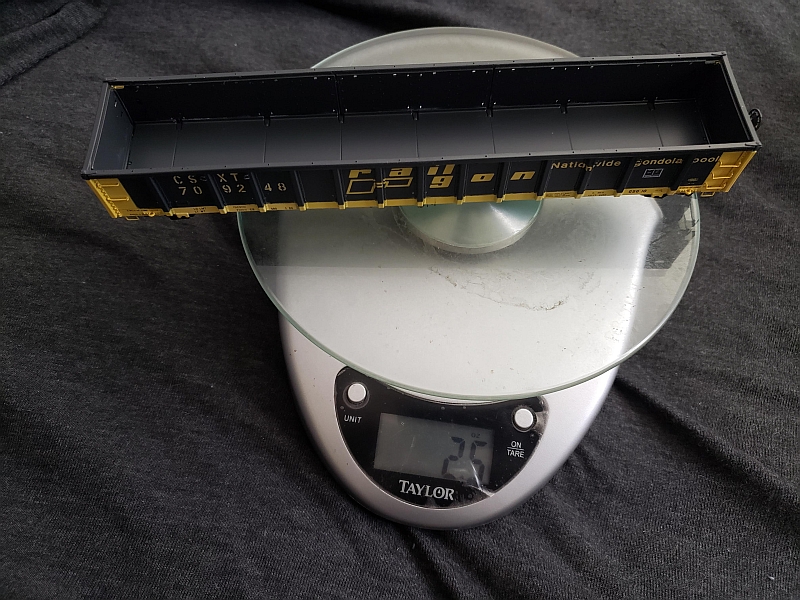 One single grab iron fell off at some point during transit. 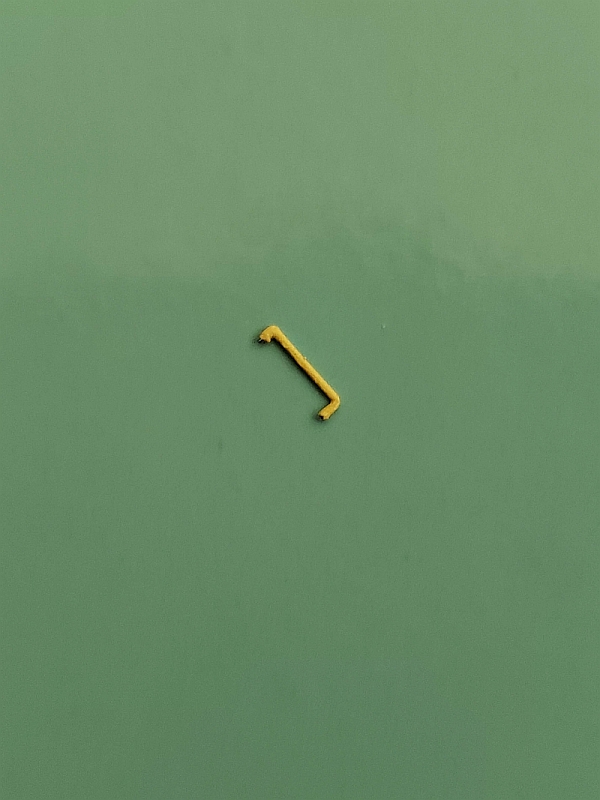 3 of 4 wheels were out of gauge, too narrow on the back to back, per NMRA standards.  This is an easy fix.  But if you don't fix it, it can cause issues.  My photo track uses Atlas track in a portion and Micro Engineering for another.  When I placed the car on the track for photos, one axle dropped inside the gauge of the rail. 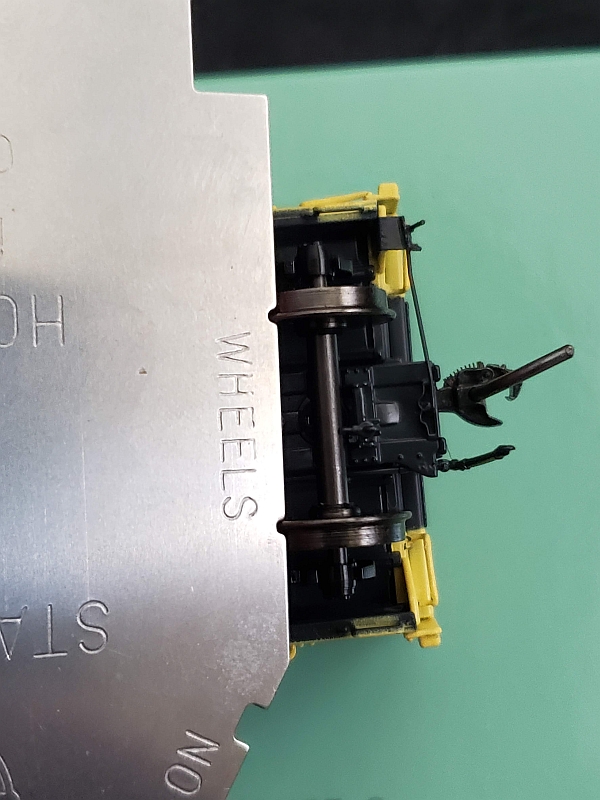 Lastly, there appears to be some latent sprue nubs on the trucks, the only obvious sprue marks on the whole car.  I'll clean these up with a file when I weather the car. 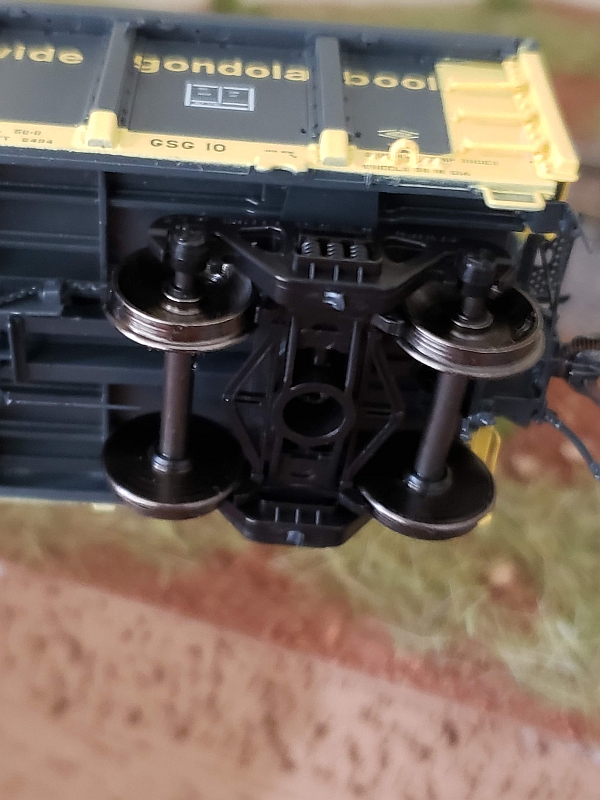 I try to remain impartial when I do these quick reviews for the website.  But trust me when I say, I REALLY wanted to love these cars, like I said at the start, I like new manufacturers.  While the car is incredible, and it'll prove to be a fun project to weather, the review total must reflect the overall disappointment with the factory weight.

While most modelers that choose to correct this, will likely do so with a load, it impedes on operating the car unloaded.  Club settings will dictate some weighting, and layouts with less than perfect track and train cars will notice the weight discrepancy.  For this reason, and the minor imperfections noted, the car earns 4 out of 5.

If you're reading this shortly after I posted it, check out Arrowhead's website to preorder the as delivered cars.

Also, of consequence, Arrowhead and Lombard partnered with a YouTube account to produce a weathering video.  Josh Clark walks you though how he dented the sides of the car.  In this video he noted, as had Blaine during the live unveiling, that you could likely separate the brass from the plastic while denting the brass sides.